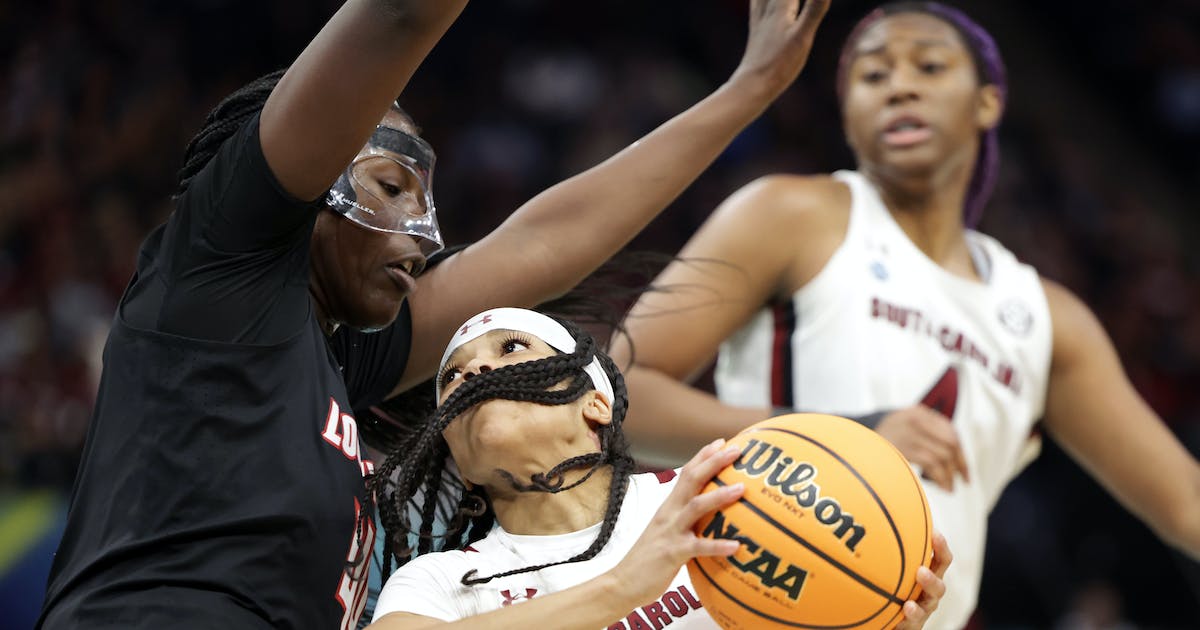 South Carolina coach Dawn Staley views every season as a series of tests. Most of the time, her team passes. Once in a while, the Gamecocks falter, as they did in last year’s NCAA semifinals.

The good thing, Staley said, is that basketball allows multiple opportunities to try again. Friday, the top-ranked Gamecocks earned an A-plus, defeating Louisville 72-59 at Target Center to advance to Sunday’s NCAA championship game against UConn. South Carolina (34-2) is pursuing a second national title after winning the crown in 2017.

National player of the year Aliyah Boston made the most of her do-over in the semifinals. She finished with a game-high 23 points and 18 rebounds, shooting 67% from the field and making six of seven free throws. Brea Beal contributed 12 points and led a defensive effort that held Louisville’s Hailey Van Lith to nine points, ending Van Lith’s streak of four tournament games with 20 or more points.

The Gamecocks ended last season with a 66-65 semifinal loss to Stanford, as Beal and Boston both missed chances to score in the final seconds. Given an opportunity to write a different outcome, they didn’t let it get away.

“This year, we knew we were going to be tested,” said Boston, who scored 15 in the second half. “This is the hump we needed to get over, and we got over.

“We’re on to the national championship game. We’re really excited.”

Van Lith finished with four field goals on 11 shots and scored only two points in the first half. Forward Emily Engstler, who led the Cardinals with 18 points, fouled out with 4:56 to play. Louisville finished with just one three-pointer, while the Gamecocks were six of 17 from long range.

Louisville surged to a 22-19 lead in the second quarter before South Carolina responded with a 15-6 run to close the half. The Cardinals never got closer than six points in the final 20 minutes.

“We lost this game, but I don’t think we gave up, not on one play,” Engstler said. “I think we should all leave this arena with our heads held high.”

South Carolina was grateful to stick around for a couple more days. At the Gamecocks’ first practice last fall, Beal said, they fully turned the page on last season’s disappointment, focusing on playing as a close-knit group.

The Gamecocks passed test after test on the way to the title game. Friday’s victory was their 13th this season over a ranked foe, most of any team in the nation. After scoring the first seven points, they faced another moment of truth in the second quarter, when the Cardinals turned a nine-point deficit into a three-point lead.

Staley, whose team has played with poise all year, responded with an 11-2 run and never trailed again.

“We were able to take their hit and just keep playing,” Staley said. “We just let the game settle in and corrected it on the fly.”

The Gamecocks’ reward? Another test, the biggest one yet.

“It’s a relief right now, and it feels great,” guard Destanni Henderson said. “We’re not done yet. We still have unfinished business.”